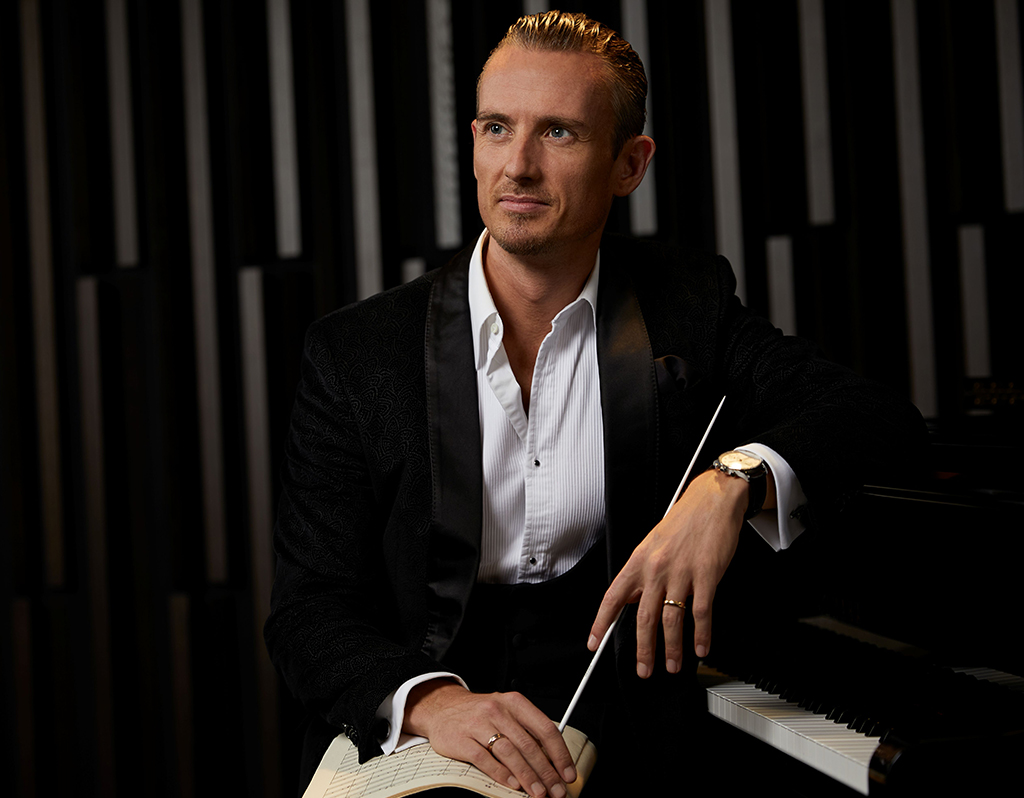 Alexander Shelley succeeded Pinchas Zukerman as Music Director of Canada’s National Arts Centre Orchestra (NACO) in September 2015. The ensemble has since been praised as ‘an orchestra transformed … hungry, bold, and unleashed’ (Ottawa Citizen) and Alexander Shelley’s programming credited for turning the orchestra ‘almost overnight … into one of the more audacious orchestras in North America’ (Maclean’s Magazine).

Born in London in October 1979, Alexander Shelley, the son of celebrated concert pianists, studied cello and conducting in Germany and first gained widespread attention when he was unanimously awarded First Prize at the 2005 Leeds Conductors’ Competition, with the press describing him as ‘the most exciting and gifted young conductor to have taken this highly prestigious award. His conducting technique is immaculate, everything crystal clear and a tool to his inborn musicality.’ In August 2017, Alexander Shelley concluded his tenure as Chief Conductor of the Nürnberger Symphoniker, a position he held since September 2009. The partnership was hailed by press and audience alike as a golden era for the orchestra, where he transformed the ensemble’s playing, education work and international touring activities. These have included concerts in Italy, Belgium, China and a re-invitation to the Musikverein in Vienna.

In January 2015, he assumed the role of Principal Associate Conductor of London’s Royal Philharmonic Orchestra, with whom he curates an annual series of concerts at Cadogan Hall and tours both nationally and internationally.

Alexander Shelley was awarded the ECHO Prize in 2016 for his second Deutsche Grammophon recording, Peter and the Wolf, and both the ECHO and Deutsche Grunderpreis in his capacity as Artistic Director of the Deutsche Kammerphilharmonie Bremen’s Zukunftslabor, a visionary project of grass-roots engagement, which uses music as a source for social cohesion and integration. Through his work as Founder and Artistic Director of the Schumann Camerata and their ground-breaking 440Hz series in Dusseldorf, and through his leadership roles in Nuremberg, Bremen and Ottawa, inspiring future generations of classical musicians and listeners has always been central to Alexander Shelley’s work. He has led the German National Youth Orchestra on several tours of Germany and works with many thousands of young people a year in outreach projects. He regularly gives informed and passionate pre- and post-concert talks on his programmes, as well as numerous interviews and podcasts on the role of classical music in society. He has a wealth of experience conducting and presenting major open-air events – in Nuremberg alone he has, over the course of nine years, hosted more than half a million people at the annual Klassik Open Air concerts, Europe’s largest classical music event.