As the Royal Philharmonic Orchestra (RPO) approaches its seventy-fifth anniversary in 2021, its mission to enrich lives through orchestral experiences that are uncompromising in their excellence and inclusive in their appeal, places the RPO at the forefront of music-making in the UK. Performing approximately 200 concerts each season and with a worldwide audience of more than half-a-million people, the Orchestra embraces a broad repertoire that enables it to reach the most diverse audience of any British symphony orchestra. Whilst artistic integrity remains paramount, the RPO is unafraid to push boundaries and is equally at home recording video game, film and television soundtracks and working with pop stars, as it is performing the great symphonic repertoire.

Cadogan Hall in London has been the Royal Philharmonic Orchestra’s home since 2004. Here it performs an annual season of concerts, many of which are subsequently toured to its seven principal residency venues. In addition, the Orchestra promotes more than forty-five concerts each season at partnership venues across the country, several of which are in areas where access to live orchestral music is very limited. In London, the Orchestra also promotes a season of symphonic concerts at Southbank Centre’s Royal Festival Hall and a popular series at the iconic Royal Albert Hall, where it has recently been appointed as the Hall’s Associate Orchestra.

As a respected cultural ambassador, the RPO enjoys a busy schedule of international touring, performing in the world’s great concerts halls and at prestigious international festivals. This season’s touring highlights include visits to Belarus, Slovakia and a three-week tour of the USA.

The RPO is recognised as being the UK’s most in-demand orchestra, an accolade that would have pleased Sir Thomas Beecham, who founded the RPO in 1946. His mission was to lead a vital revival of UK orchestras after World War II and form an ensemble that comprised the finest musicians in the country. The Orchestra has since attracted a glittering list of principal conductors, including Rudolf Kempe, Antal Doráti, Walter Weller, André Previn, Vladimir Ashkenazy, Yuri Temirkanov, Daniele Gatti and Charles Dutoit.

The RPO aims to place orchestral music at the heart of contemporary society, collaborating with creative partners to foster a deeper engagement with communities to ensure that live orchestral music is accessible to as inclusive and diverse an audience as possible. To achieve this, in 1993 the Orchestra launched RPO Resound, which has grown to become the most innovative and respected orchestral community and education programme in the UK and internationally. The programme delivers bespoke, pioneering education, community and talent development projects to a wide range of participant groups, including homeless people, children, young people and stroke survivors, always with the overarching objective to leave a lasting legacy.

The Royal Philharmonic Orchestra has always been entrepreneurial and in 1986 it was the first UK orchestra to launch its own record label. The RPO has gone on to embrace advances in digital technology and now achieves nearly thirty million downloads of its recorded music each year. The Orchestra is increasingly active online (www.rpo.co.uk) and on social media (@rpoonline) providing audiences with the opportunity to engage with the RPO and enjoy ‘behind-the-scenes’ film clips and photographs.

Passion, versatility and uncompromising artistic standards are the Royal Philharmonic Orchestra’s hallmarks, and as it looks forward to an exciting future with its new Music Director, Vasily Petrenko, it will continue to be recognised as one of the world’s most open-minded, forward-thinking and accessible symphony orchestras.

‘...with poised contributions from across the orchestra, including silky, dextrous solos by the concertmaster Duncan Riddell and Katherine Lacy’s bubbly, characterful clarinet, everything felt just right. [Vasily] Petrenko incisively peeled away the bombast and uncovered the delicacy as well as the drama of the music.’ The Times, June 2019

‘Outstanding playing from the Royal Philharmonic Orchestra: I have not heard them on such form in years.’ The Arts Desk, BBC Proms 2019

‘The RPO was on rousing form… [and] left a stirring and exalting impression, as this music should.’ Classical Source, BBC Proms 2019

‘[Alexander] Shelley and the RPO were on great form here, with Shelley setting quick tempi and the RPO responding with accuracy and tight ensemble. The woodwind section deserve particular praise, with considerable solo work required, not least from bassoonist Helen Storey, with that heartrending plea in the Largo, as well as flautist Emer McDonough’s plaintive second movement solo.’ Bachtrack, November 2019

‘[The concert] was a wonderfully engaging affair, notable for the beauty of the orchestral sound.’ The Guardian

‘[The Firebird Suite] …was both delicately beguiling and packed a punch, proving in the process why this orchestra still matters.’ The Telegraph

‘The string and wind sections played off each other spectacularly, with careful attention to detail and tone. This was to be expected from the Royal Philharmonic, one of the best and most prestigious symphonic orchestras in the world.’ The Daily Californian

‘…punchy orchestral playing in an exciting performance.’ The Telegraph 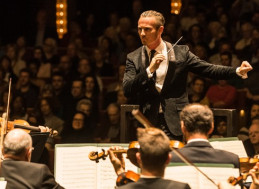