Spotlight on A Londoner in New York…

Adam Wright, Sub-Principal Trumpet says: ‘A Londoner in New York is a fantastic piece to perform because it’s so descriptive, with each movement really making you feel as though you’re walking through that amazing city. My favourite movement is Radio City as it’s such a great tune, one that I guarantee you’ll be singing all the way home.’

BAFTA-winning composer Jim Parker was born in Hartlepool, County Durham in 1934. He began his professional career as an oboist playing in leading ensembles before concentrating on a career of composing and conducting, successfully producing music for the concert hall, theatre, film and television. His numerous credits include many well-loved British television classics, from House of Cards and Midsomer Murders to Ground Force and Moll Flanders, alongside poem settings, musicals and a Clarinet Concerto, and more. His skill in creating music that aptly underscores the drama of a storyline is equalled in his concert works, such as A Londoner in New York, commissioned by the Philip Jones Brass Ensemble, where he produced atmospheric impressions using the full range of instrumental colours available.

Listen out for Midsomer Murders television soundtrack, the musical Follow the Star and The Golden Section for brass quintet.

A Londoner in New York Live at Cadogan Hall

On 30 September 2020 at our first Spotlight Series concert musicians from the RPO Brass and Percussion sections performed Jim Parker's A Londoner in New York to a socially distanced audience at Cadogan Hall. Watch the full performance above with an introduction from the composer.

Listen to Jim Parker in conversation

RPO Vice-Chair and Co-Principal Trombone Matthew Knight interviews Jim Parker about his life, career and works ahead of the performance. Click here to play, or watch the shorter video interview here. 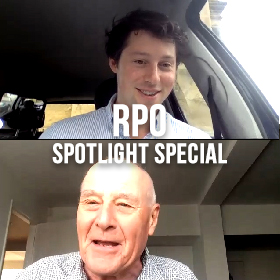 Discover other composers featured in the Spotlight Series here.