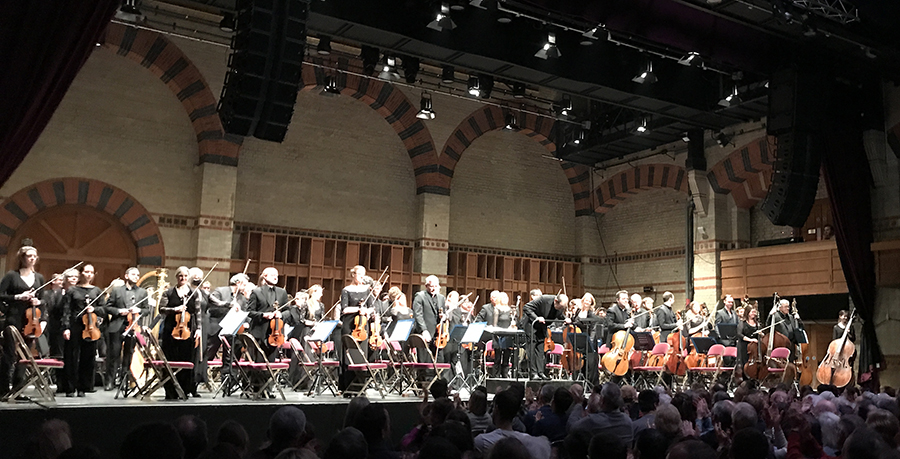 A program of his finest work with compositions from Star Wars, Harry Potter and Indiana Jones to name a few, performed exquisitely by the orchestra under the baton of Robert Ziegler.

Speaking to a member of the audience after the concert, they said: “It was an amazing performance, and it was excellent to be back in a concert auditorium seeing one of the top orchestras”.

Scroll on to read a review by Joseph Winters, a freelance audio engineer, music producer and music journalist who is currently at University of Suffolk studying Creative and Commercial Music.

The evening commenced with a tremendous introduction from conductor Robert Ziegler, during which he dedicated the performance to the awful events that are currently occurring in Ukraine.

The program opened with the triumphant theme from Superman which started the evening off in true John Williams style.  The second piece was clearly long awaited by several members of the audience, this was Hedwig's Theme from Harry Potter and the Philosopher’s Stone. Before the music began you could hear the excitement in the crowd at the start of the piece, which opens with a solo dulcitone.

The next work of the evening certainly captivated the audience, in a unique way in comparison to the first two pieces. This was of course the theme from Jaws, the second film in which John Williams worked with renowned director Steven Spielberg and earned his second Academy Award for Best Original Score.  This features the famous menacing two notes which sets the mood of the audience perfectly. This theme was performed with expert, menacing precision by the RPO.

The following piece in the program was Indiana Jones: Raiders March from the first of the Indiana Jones franchise, The Lost Ark, another collaboration with director Steven Spielberg and features some stunning brass playing from the orchestra.

The program visited the first of the space/alien themes of the evening with Close Encounters of the Third Kind, with the first and second being a sighting of a UFO, physical experience and the third being contact.  This was another alliance with director Steven Spielberg and features some stunning playing by all members of the orchestra, with great detail in the string section.

Dartmoor, 1912 followed, and is a more recent work by Williams and Spielberg released 100 years later in 2012.  A profound and sensitive composition from the adaptation of Michael Morpurgo’s War Horse, opening with a delicate flute solo before being boldly joined by the orchestra.

The first half of the concert closed with Adventures on Earth from E.T. The Extra-Terrestrial.  This encircling the full 9-minute suite which in the film includes the iconic flying scene with the motif that everyone knows and loves.  You could tell how much the audience relished this piece by the standing ovation at the end of the performance.

After the interval, the next half of the concert set out with the magical sound of Flight to Neverland from another Spielberg film, Hook.  You could certainly say the audience were hooked in after listening to this second half opener!

Succeeding Flight to Neverland was the Prologue from JFK, a film directed by Oliver Stone.  The piece opens with military style drums and a trumpet solo played gracefully by the RPO’s principal trumpet for this concert Thomas Nielsen, using the clean blend of bold trumpet sound with some skilfully placed vibrato. JFK explores the events leading up to the assassination of the president in 1963 by Lee Harvey Oswald and received 2 Academy Awards among others.

The conductor Robert Ziegler introduces the next piece by talking about the famous conversation between John Williams and Steven Spielberg.  John was speaking to Steven “You need a better composer than I am for this film” to which Steven simply replied, “I know, but they’re all dead!”  This piece being the theme from Schindler’s List. I, for one, am glad John Williams did compose this beautiful violin solo, played superbly by the soloist Duncan Riddell. This made for a special moment in the concert and is one of my favourite John Williams compositions, hearing it played so wonderfully by the orchestra was amazing.

The last few pieces of the evening all came from a galaxy far far away, of course being from the different Star Wars films, including the notably famous Main Theme.  The audience gave a well-deserved standing ovation after hearing these performances.  They were then treated to one more as an encore, the iconic Imperial March which first appeared in Episode IV, A New Hope which wonderfully rounded off the program.

This truly was an incredible way to celebrate the music of John Williams and I have no doubt that he would be immensely proud to hear some of his greatest works played so superbly by the Royal Philharmonic Orchestra.