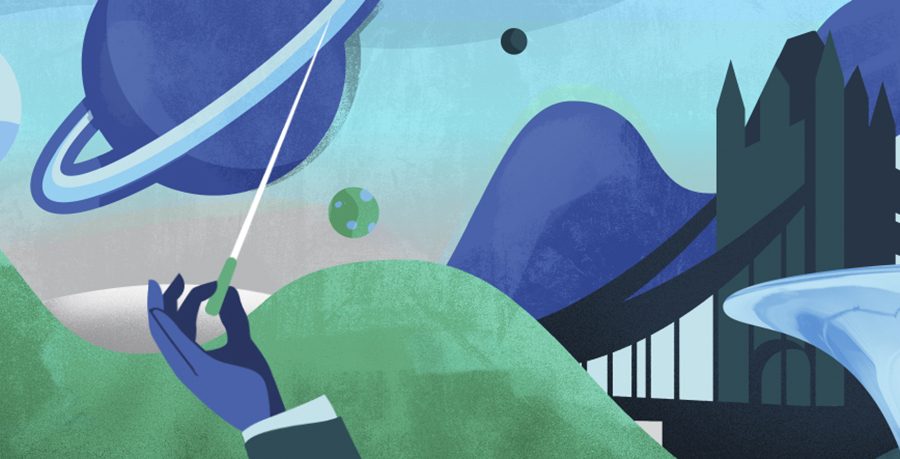 Thank you for your support and interest in the conclusion of our Great British Music series of concerts at Southbank Centre's Royal Festival Hall and the Royal Albert Hall.

As part of our #MoreMusic series, where we go beyond the concert's repertoire, discover other pieces by the composers' contemporaries and the music that inspired the repertoire.

Premiered just over a decade after Elgar’s Sea Pictures, Vaughan Williams’ Sea Symphony was the composer’s first symphony, setting words by Walt Whitman to music. The work was performed by the RPO in May this year at the Barbican as part of the celebrations surrounding Vaughan Williams’ 150th birthday. Elgarian melodies, dreamy choral soundscapes and dramatic soprano solos populate Arnold Bax’s Enchanted Summer. A young Thomas Beecham conducted the opera’s UK premiere in 1909. Frank Bridge, Benjamin's Britten teacher, wrote his symphonic poem The Sea in Eastbourne in Sussex, the same place Debussy completed La Mer. Hokusai’s famous The Great Wave off Kanagawa gripped the imagination of the French art world, as well as that of the French composer - La Mer is emblematic of the composer’s Impressionism which rejected the programmatic, to "not attempt at direct imitation, but rather [capture] the invisible sentiments of nature". Sea Drift was one of the many works by Delius championed by Sir Thomas Beecham, which also draws from the poetry of Walt Whitman.

Each movement of Le Tombeau de Couperin is dedicated to one of Ravel’s friends who lost their lives in the First World War, and pays musical homage to the French Baroque harpsicord tradition. Charles Villers Stanford’s Mass Via Victrix 1914-1918 for baritone, chorus and orchestra was written as a national commemoration to the end of the war, but lay dormant for nearly a century until its first performance in 2018. Great War veteran and composer-poet Ivor Gurney suffered both deep mental and physical scars from the conflict. A student under Stanford before the War and a lifelong friend of Herbert Howells, he wrote the War Elegy in 1920 as he returned to his studies at the Royal College of Music under Vaughan Williams. Howells’ Requiem, composed between 1932-33, was strongly inspired by grandeur of Gloucester Cathedral, but later came to be associated with the death of his son in 1935 and the resulting Hymnus Paradisi, in which Howells found comfort from the music of the Requiem.

Britten was only 26 when he wrote the Sinfonia da Requieum, an orchestral symphony in three movements. A friend and contemporary of Britten, Michael Tippett was a unique voice in the British musical landscape. Written in response to the events of Kristallnacht in 1938 and completed in 1944 A Child of Our Time, like the War Requiem, was a call for pacifism and solidarity with oppressed people everywhere. John Adams' 2005 opera Doctor Atomic wrestles with the implications of wielding immense destructive power in the lead-up to the testing of the first nuclear bomb in 1945.

Elgar's The Dream of Gerontius

Featuring another of Elgar's great religious cantatas, The Apostles, and a more diabolical journey of the soul in Liszt's Faust Symphony after The Dream of Gerontius and Wagner's Parsifal at the Royal Albert Hall on 7 April

Walton's Symphony No.1, Britten's Young Person's Guide to the Orchestra and Shostakovich's Cello Concerto No.1

More music after our concert on Wednesday 23 March at Southbank Centre's Royal Festival Hall with music by Bartók, Britten, Prokofiev, Shostakovich and Sibelius.

Holst's The Planets and Dani Howard

Delve into more contemporary works after Dani Howard's Ellipsis, and more in the vein of Rachmaninov's Rhapsody on a Theme of Paganini and Holst's The Planets after our concert on 3 February at Southbank Centre's Royal Festival Hall.

Discover similar pieces including violin concertos by Coleridge-Taylor, Britten and Leighton after our concert on Wednesday 3 November at Southbank Centre

Explore beyond the repertoire of the Royal Philharmonic Orchestra's 75 Anniversary Concert on 21 September 2021 with more music from the composers featured on the night.

As the Royal Philharmonic Orchestra celebrates 75 years, we reflect on our history whilst looking ahead to the next part of our journey.