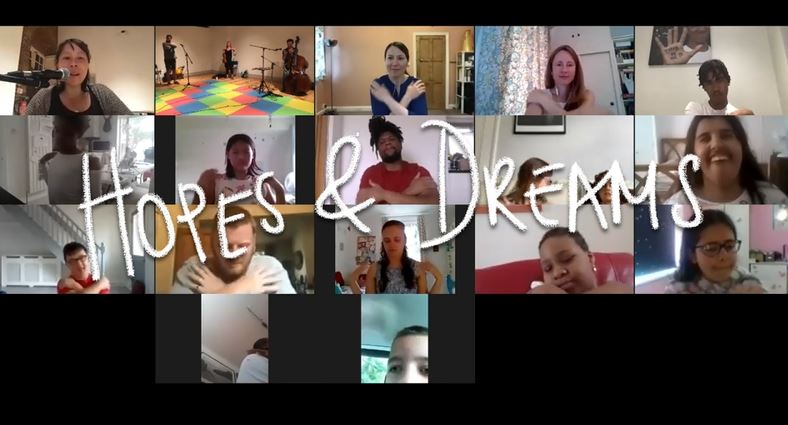 For five days in August, I had the privilege of taking part in the annual collaboration between RPO Resound and the Royal Society for Blind Children (RSBC), which brings together young people with vision impairments to create original music on a given theme.

This year’s project took place entirely online, and I was able to attend remotely. I’ve been shielding for the past five months, so it was very exciting to log on to Zoom and see RPO colleagues Sali Wyn Ryan, Rupert Whitehead, and Ben Wolstenholme, along with project leader Natasha Zielazinski and the Resound team, together in the crypt of St. James’ Church, Clerkenwell. Project manager Lisa Rodio worked tirelessly behind the scenes, making sure everything ran smoothly, from adjusting players’ microphones to creating breakout rooms on Zoom.

Soon we were joined online by 16 young participants, full of energy and enthusiasm! Natasha led the session as though it was a radio show, which worked well considering the challenges we faced over Zoom. After we greeted and introduced everyone, we split into breakout rooms and discussed this year’s theme, which was ‘Hopes and Dreams’. After some brainstorming, we began to compose lyrics and melodies based on our ideas. Though Zoom makes it difficult to play together, we found ways around this such as demonstrating passages back one at a time, with instructions that these should be edited together to create a certain sound – such as a ‘desert rumble’ – or having the RPO team in situ play together to demonstrate the basic sound which we could add to with recordings after the fact.

Over the course of the week our piece began to take shape. There were many talented singers in the group, and some of the participants played instruments such as clarinet, piano, guitar, viola, and even steel pan drum! RPO percussionist Gerald Kirby made a special Zoom appearance to explain how to create percussion instruments from everyday items. One of our participants found that a kleenex box can double as a drum!

Normally there would be a final performance at the end of the project, but that was impossible due to our online constraints. However, the RPO team, along with a few RPO special guests, recorded the music remotely, and participants made their own recordings from home. Natasha expertly combined the recordings and a professional filmmaker shaped a short film of our creations from the week. We’re very excited to see the final outcome online on Friday 4th September, and hope you will enjoy watching what we have put together!

Something that struck me during the project was how wonderfully supportive the participants were of one other. Although they all attended from their respective homes, there was a real feeling of togetherness throughout the project. Some of the lyrics they wrote were, “we can help each other out and be kind to one another”, and “we’re back together, stronger than ever, we’ll never give up”. The project left me feeling hopeful and inspired by these remarkable young people, and I look forward to being able to work with them in person someday!

This project was made possible through the generous support of the St. James’s Place Charitable Foundation.