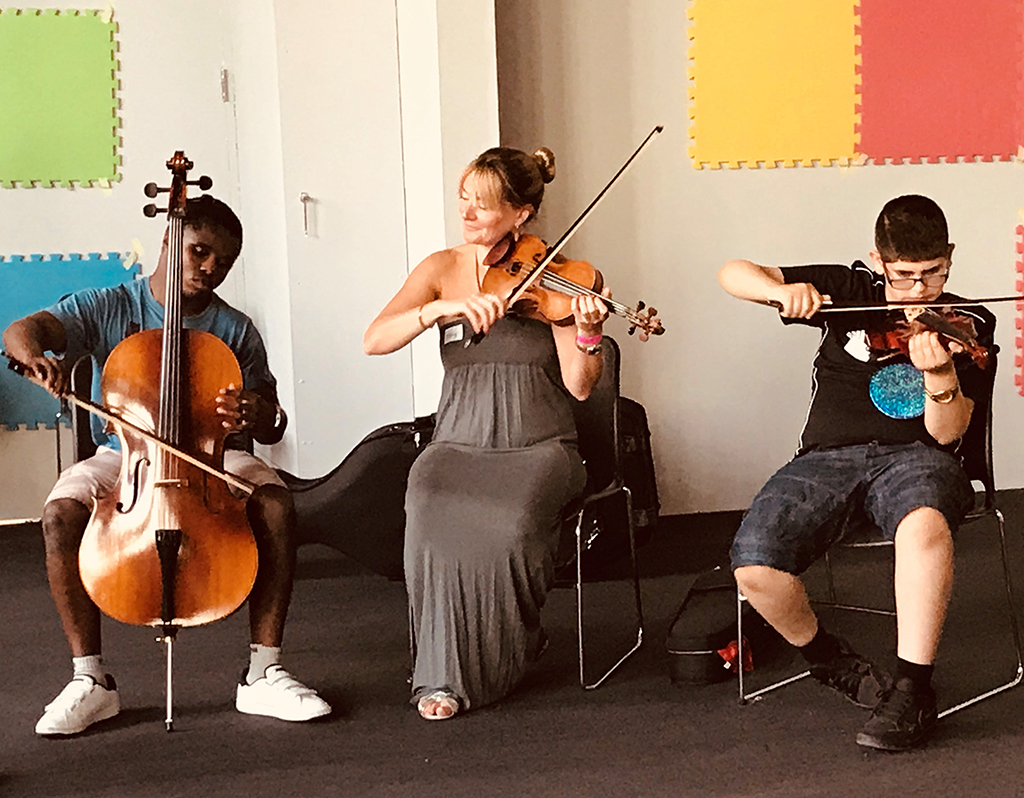 It’s British Summertime and the stars certainly aligned on this project! As a Leo, I recently celebrated a milestone birthday, went on a blow-out holiday, then came straight back to work on some recording sessions before delving into this exciting RPO Resound project working alongside young people with vision impairments (VI) from the Royal Society for Blind Children (RSBC), hosted by the Science Museum. There’s never a dull moment as a musician in the RPO!

This creative project brings together young people with VI to try out instruments, make friends, and compose and perform brand new pieces of music. Our journey began on Wednesday morning with three RPO musicians (myself on violin, Rupert Whitehead on trombone and Gerald Kirby on percussion) meeting a group of fifteen enthusiastic young participants ages 11-22 from the RSBC. After introducing ourselves to one another, we split into three groups, with each group receiving a personal tour around the Information Age gallery, guided by Science Museum volunteers. The gallery is made up of six themed zones: Cable, Broadcast, Exchange, Constellation, Web and Cell. At the centre of the gallery boasted a huge Aeriel Tuning Inductor, known as the Rugby tuning coil. This awe-inspiring object (that looks like a ginormous wooden spider’s web!) represents all the cables and networks that span our globe today. As a low-frequency transmitter, it was used to send out signals across the world from Rugby radio station, with messages even able to travel underwater to submarines. This object became the main focal point of our subsequent workshops, during which participants composed music inspired by the objects they touched, saw, were explained by the guides, and what some could read. It was fascinating to see some participants learn through braille guides: 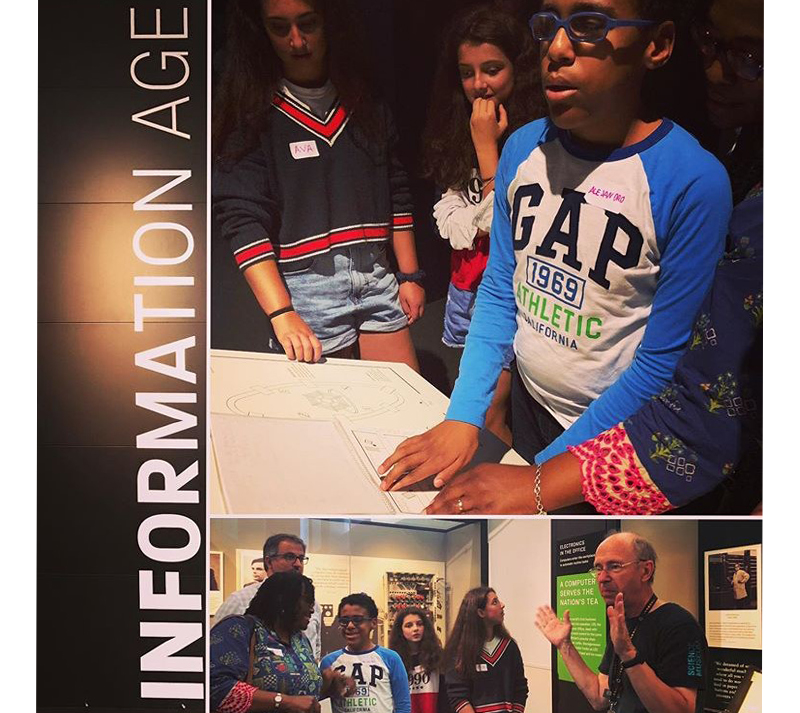 After our personal tour, it was time to return to our rehearsal space within the Science Museum and get creative with making sounds to represent what we learned. This was my first time ever working on the RPO Resound VI project, and I truly did not know what to expect. As a musician in general, and certainly in the RPO, we are always stepping into the unknown and out of our comfort zones. I was definitely out of my comfort zone initially, as I did not know how VI might affect each participant’s ability to learn given they can’t rely on seeing or watching. But if anything, they were more resilient, determined and eager to learn and be part of something bigger: to be composers, and performers alongside us RPO professionals! This in itself really boosted my enthusiasm and I felt proud to accept this challenge head-on.

I bonded straight away with one particular participant who was completely blind and autistic. “You’re Scottish,” he said! “Indeed I am!” I laughed! We were then grouped together with a few others and came up with many “cosmic” ideas to form our music. My group instrumentation consisted of tubular bells, glockenspiel, violins and cello – not your classic set up, but we made it work! 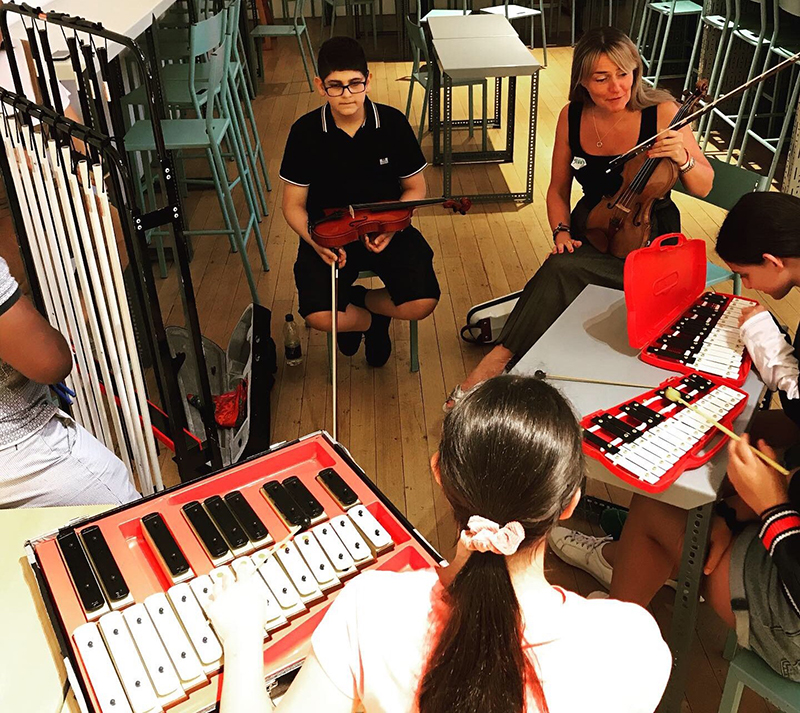 We then spent the next two days merging all our ideas with the other groups’ musical material, pulling it all together into four individual pieces, culminating in a Friday afternoon performance showcase within the gallery itself. It was so humbling to see how excited the RSBC participants were throughout this project, with everyone getting hands-on stuck in and involved. The final performance really felt like a big event! Arts Council England even allowed the RPO to hijack their Instagram account for the day to generate interest in our event, giving people background information about the project and increasing our audience for the concert through live streaming. The participants loved getting involved with the takeover, and one of them even introduced a live video link on the ACE Instagram page!

The performance opened with a short piece by Stockhausen called “Leo” from Tierkreis – which is German for Zodiac. Selected by workshop leader Natasha Zielazinski in response to the gallery’s Constellation zone, the composition consists of twelve melodies, each representing one sign of the zodiac. It sounded very surreal on violin, trombone and vibraphone, with this combination not being a standard line-up, but it was effective nonetheless! Also, it was fortuitous that my star sign is Leo, causing me to feel even more connected to the piece; I even wore my Leo Zodiac necklace!

Anyway, following “Leo” by Stockhausen, we transitioned into our first group piece: “Leo Bells”. Here, each participant had a single chime bar and struck them in a unison rhythm to make it sound like Morse code. Twelve strikes of the tubular bells (quasi Tam O’Shanter-type vibe!) signalled the opening theme to our second piece, “Tribal”, where violins and cellos played an eerie tremolando, with a bass guitar acting as our low-frequency transmitter. We then added trombones to sound like huge foghorns (almost like distress signals of communication). More tubular bell strikes led us into our third piece of music based on the phone exchange. Here, the RSBC & RPO team composed an uplifting song based on The Samaritans helpline. The word content and melody was beautiful, and the smiles were beaming on all RSBC, RPO and audience faces alike. It was so special! 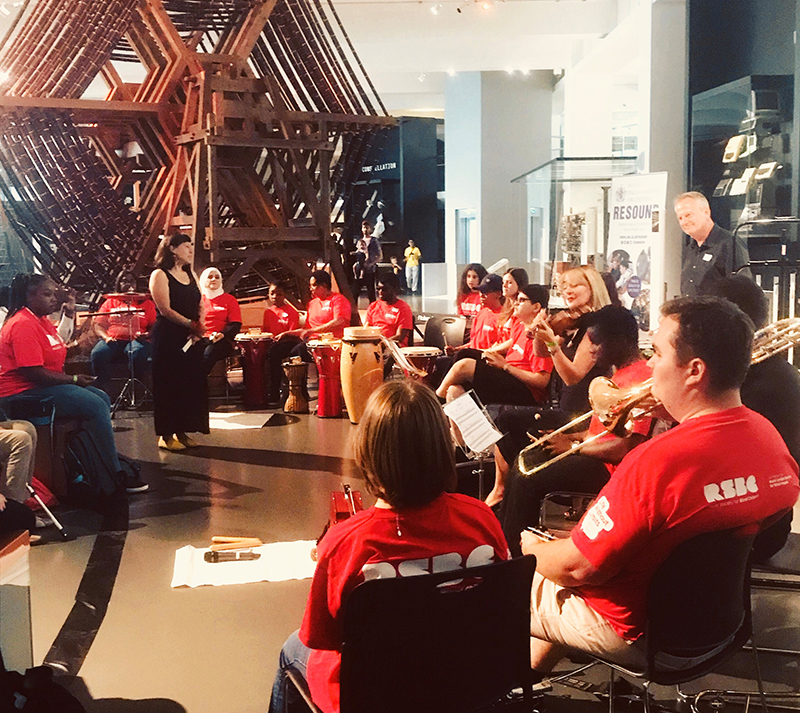 If you’ve had a bad day, you’ve got something to say

Just give me a call, I’ll listen through it all.

I’ll listen to your worries

Take your time, there’s no hurry.

A shining day will come your way.

Our final piece was titled “Space Romance” and was inspired by satellites and communications in space merging together through sweet music. The main theme was played by flute accompanied by vibraphone, then clarinet harmony followed by tenor horn, and finally topped by me on violin – soaring above like a bird flying high! Once we’d finished, the audience literally went wild with applause, while all the performers exuded a great sense of satisfaction and pride.

It’s not often that I get visually emotional through performing music, but this project truly touched me to my core. It felt like a “life lesson” in that we should never take things in life for granted – especially our health – and be thankful for what we have. This exceptionally bright, intuitive, talented young group of participants are a testament to life without limits, despite their VI. Their friends and family all came over to thank the RPO team post-concert, and even said that some of their kids have been inspired to learn more instruments, which is just amazing and blew me away! One participant hailed “The gallery showcased our achievements and the extent to which the human race has developed [technology] in order to stay connected.” I couldn’t agree more. It was such an inspirational project and I am truly thankful to the RPO Resound team for having been part of this. Until the next project, here’s to living life without limits and keeping those stars aligned…