On the bank of the river just down from the Thames Barrier, there is a workshop. Inside, on a shelf, there’s a tin containing nearly 200 small pieces of ebony with names written on one side. These are the names of double bass players going back generations. It’s a miniature history of the double bass in the palm of your hand.

What on earth has this got to do with the Royal Philharmonic Orchestra?

Since September 2018, aside from my role as a member of the RPO’s double bass section, I have been squeezing in a weekly visit to the workshop of Roger Ernest Dawson. Why on earth would you squeeze something into the schedule of the recently titled “Busiest Orchestra of 2018”? As a bass player, I’ve always had a bit of a geeky interest in the heritage and wanted to learn about the making and repairing side of the instrument. Affectionately known as “Magic Hands” for his repairing skills, Roger is arguably one of the world’s leading authorities on the double bass, so why not go and learn from the best?

Roger started in the industry as a 15-year-old apprentice on Wardour Street, Soho - the former epicentre of London’s string instrument making, repairing and dealing. Half a century and 40 of his own double basses later, it’s fair to say he is a master of his craft.

When my desk partner, Mark O’Leary, decided to commission a bass from Roger, I got very jealous, took out a loan and commissioned one for myself. The RPO bass section is having twins! 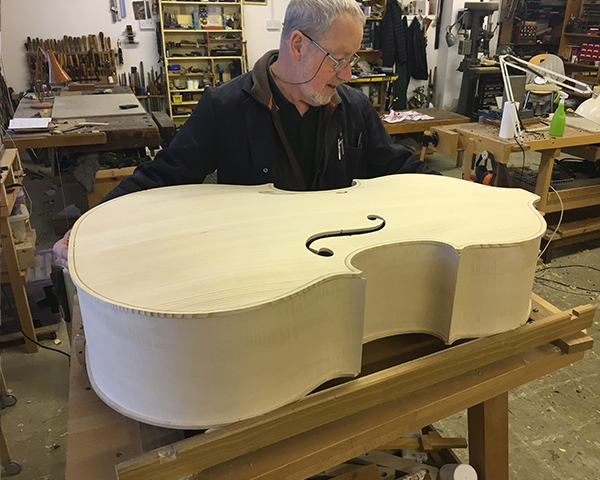 It occurred to me this may be the opportunity to ask Roger if I could go in for a day, watch the master at work and maybe even learn how to make a bit of my own bass. Day 1: “what’s your knowledge of tools?” Gesturing to the fairly intimidating band-saw... “I remember using that in design lessons at school?” I realised I may be in over my head...

Unwittingly, that one day has turned into ten months and I’ve managed to retain all ten digits.

Since then, I’ve been learning how to saw, plane, bend, glue, carve, route, chisel, scrape and shape all under the watchful eye of Mr. Dawson. I occasionally sweep up and buy the coffees too to get the full authentic apprenticeship experience.

Whilst Roger has been working away on my desk partner Mark’s bass, I’ve spent my time learning to bring back to life an old German bass that Roger was gifted some years ago. Every apprentice he’s had has done some work on it. I was quite excited to be the person to possibly make it play again for the first time in around 20 years...perhaps even bring it into the RPO when it’s finished. 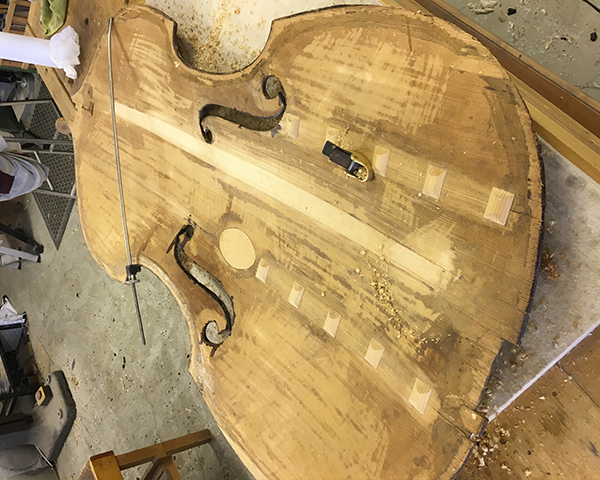 One of the most intriguing parts was seeing all the marks of its past life. Carvings in the wood help to identify where and how the bass was made, while notes etched on the inside give an insight into the workings of past repairers.

The fascinating thing about spending time with Roger has been learning the history: not just of the instruments but of the stories of the players that sat behind them. Over his time, he has known generations of the country’s bass sections, not least the RPO.

Which brings me back to the tin...

If and when you find yourself at the next RPO concert, you may spot the strange-looking gadget modified onto the scrolls of the double basses - the ‘extension’. When a double bass gets an extension put onto it, a piece of wood becomes redundant. So, no, Roger isn’t collecting trophy parts of his customers’ basses! He’s keeping them in case they want the work reversed (which they rarely do).

Some of the pieces in that tin came from the instruments of the RPO’s former bass players, and every piece tells a story. Some are players that are still in the section, others are legendary figures talked about in tales recounted over meals on tour. And some are sadly no longer with us, but their influence can still be felt in the section today. 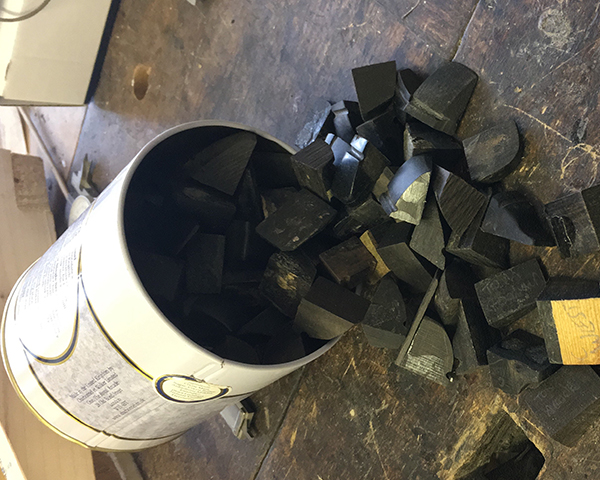 So as Roger makes the finishing touches to Mark’s bass, I wonder whether ten months will turn into ten years. I can’t imagine I’ll ever be half the craftsman he is but I suppose someone has to keep the history alive.. and perhaps collect a few more stories in the process!