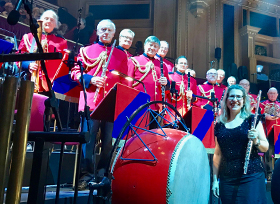 Twice a year the RPO heads to the Royal Albert Hall to entertain over 30,000 people at Raymond Gubbay Ltd's ‘Classical Spectacular’. Jo Marsh, flautist in the RPO was keen to go behind the scenes in November, to try and discover the secret to their phenomenal success.

'The first Classical Spectacular was launched in 1989, and Anthony Findlay (CEO of Raymond Gubbay Ltd.) explains that “the idea was to provide an evening of great entertainment, combining classical music favourites played by the RPO with lighting and pyrotechnics. Although the show has developed over the last 30 years with even more “spectacular” additions such as lasers and dancers, the ethos of Raymond Gubbay’s original show has remained at the core – to keep classical music live. Without the music provided by the RPO, there is no show!”

For the orchestra “Classic Specs” is always a memorable few days with many challenges. Since it coincides with our RPO Bake-Off, one unique challenge is grappling with the temptation of an extraordinarily high level of backstage baked goods! It is a well known fact that musicians enjoy good food but this really pushes things up a level. The number of talented cooks and bakers in the RPO is, well, nothing short of spectacular! This year we raised over £500 for ‘Shine Bright – The Regina O’Leary Foundation’, supporting talented young musicians. The team spirit and sheer enthusiasm of the RPO is always infectious, and never more so than during Classical Spectaculars and each concert interval zooms by in a whirlwind of cakes, sausage rolls, cheeses,chutneys and maybe the occasional glass of bubbly! 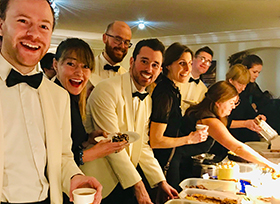 Although the music is centre-stage, it’s not just the RPO that makes up these epic performances. The number of people involved both on and off stage is huge, probably second only to the number of ear plugs distributed to the orchestra (those canons aren’t just for show!). Lincoln Parkhouse is known as the most experienced pyrotechnic firing master in the world, and has provided all the bangs and flashes for every Classical Spectacular. He listens to the live sound from the stage and follows the conductor’s beat to know when to fire. Similarly the lighting is all operated manually by Pedro Marce Socias, who follows the conductor’s every gesture for over 1000 lighting cues designed for 29 of the 30 years by Durham Marenghi . The sound of the RPO is amplified, with the renowned sound engineer Phil Wright aiming “to bring the sound to ‘cinematic scope’, taking the sound of the RPO and balancing it against the spectacle and pyrotechnics without losing any of the quality.” 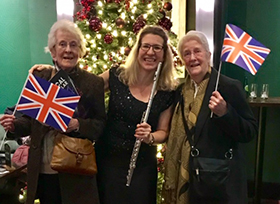 All of these awesome effects enhance what we’re playing on stage – whether it’s ballet music by Tchaikovsky, a waltz by Strauss, an operatic aria by Verdi, or Elgar’s Pomp and Circumstance March, the brilliant team of technicians, sound crew and lighting experts find something to dazzle the audience. I wonder if Ravel were still alive, would he approve of lasers being added to his ‘Bolero’?! I guess we’ll never know but it certainly looks great! Coordinating everything for the last 12 years, and entertaining the audience with his tried and tested repartee, is conductor John Rigby, who says “Classical Spectacular provides a quality evening of fun for everyone. The RPO is the best orchestra in the country and for me it is making music with old friends.” The specially designed lifting podium, unique to Classical Spectacular, rises up while John conducts Land of Hope and Glory and has been a highlight of the show for the last 10 years!

We always welcome a couple of soloists – singers or instrumentalists – to the stage, and there are some important theatrical additions, entertaining the audience and orchestra alike: the dancers, who get up close and personal with the audience, dancing in the aisles, and whose performance of the Can-Can usually sparks off a little bit of on-stage choreography from the RPO as well; the inimitable Moscow Militia – a unique group of amateur, but very expert, ‘re-enactors’, who have featured in every concert since the beginning (every member has to have at least two years experience of firing and operating, each uniform is worth a staggering £1000 and each rifle £400!); and of course the British Imperial Band – entirely made up of ex-Military musicians from all three services, they add to the orchestra in key moments, and always sound as resplendent as they look in uniform. 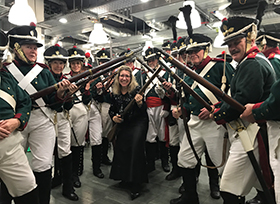 In my opinion, one of the biggest stars of the show has to be the venue itself. You’d be hard pushed to find a more impressive concert hall anywhere in the world than the Royal Albert Hall. It has been home to Classical Spectacular since the very beginning, and I hope it will be for many more to come!’

The next season of Classical Spectacular is 21st-24th March 2019.