This month we say goodbye to a true titan of our brass section, our inimitable bass trombonist of 26 years, Roger Argente. Roger joined the RPO in 1992 and has been a formidable force in the orchestra ever since. One of the RPO’s biggest characters, he is also a fixture of the busy London session scene, and has recorded hundreds of soundtracks for film and TV.

On the train from Turin to Milan for his final concert with the orchestra, at La Scala, I caught up with Roger to hear his parting thoughts, and started by asking what has changed in the RPO over the last quarter-century. “The kind of work that we do has changed a lot. It was always predominantly classical music, but the RPO even when I joined had a reputation for the film sessions it did, and the lighter programmes. One of the very first things I did with the orchestra was a Kurt Weill concert at the Festival Hall with Ute Lemper, and it was really fabulous doing repertoire like that – lighter stuff with a rhythm section and some jazz players. Working with an orchestra like this, that straightaway read that sort of music in the right style, was something quite new. And of course what's happened since then is that we do a lot more of the lighter repertoire.” Is this a positive development? “I'm not a musical snob, and I enjoy playing things like Abbaphonic, and film and broadway concerts. It's what different audiences want, and an orchestra these days can't just play Schubert 9 and Tchaikovsky 5.” 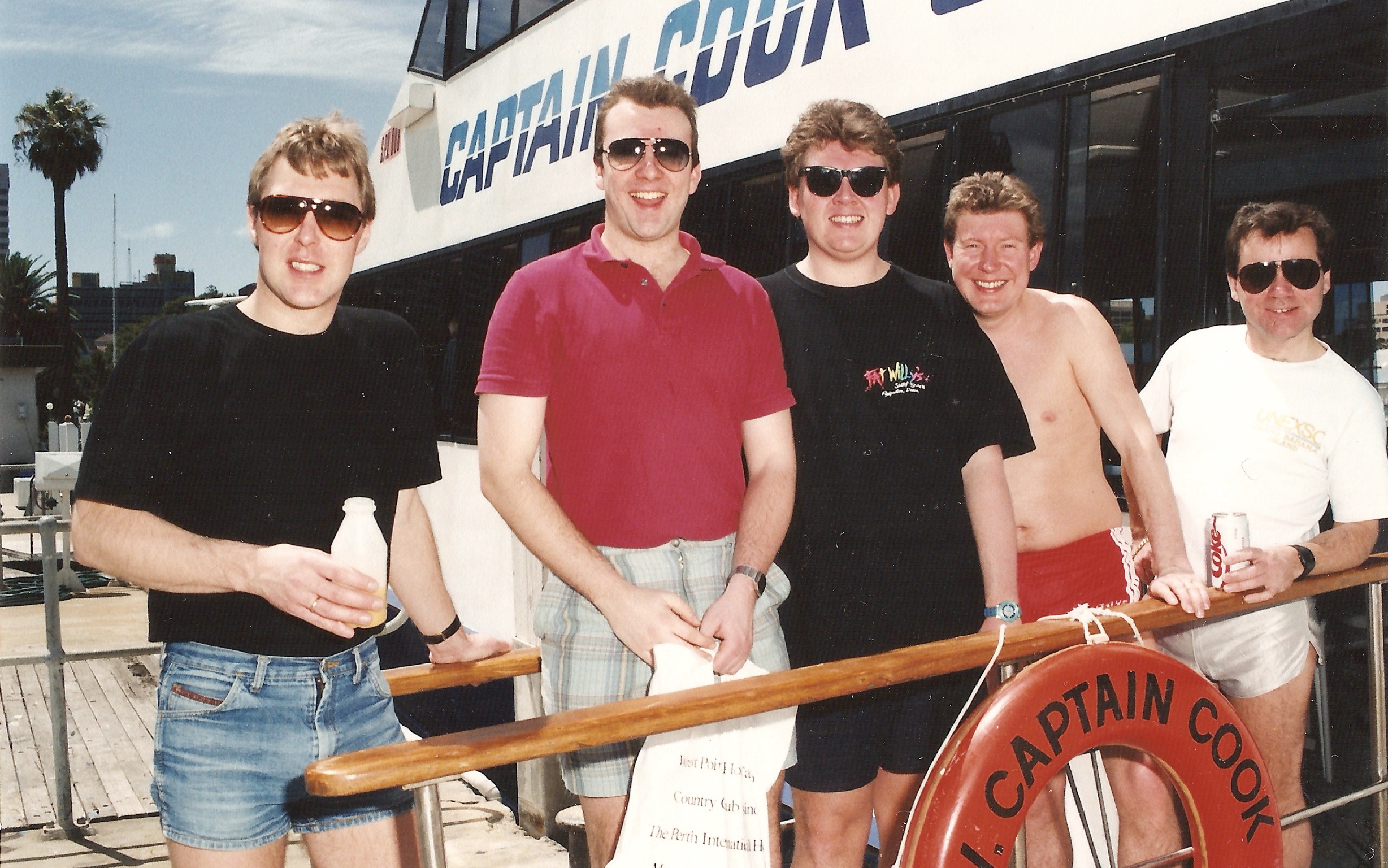 Roger (centre) on tour with the RPO in Australia in 1992.

So musically the orchestra has moved with the times, but has the culture within the orchestra changed at all? “No, I don't think it has. It's always been a very strong, friendly orchestra, and the hard-working ethos is just phenomenal. Compared to other international orchestras, if they had their funding significantly reduced they wouldn't survive, but the RPO would still go on because of that work ethos – this orchestra just rolls its sleeves up and gets it done.”

After so long in the RPO, Roger’s new job, as Head of Brass at the Royal Welsh College of Music and Drama, is going to be a big change. I wonder what he’ll miss about life in the RPO. “It's the people that I'll miss. I won't miss the early starts, and travelling up and down the M1 – I've done my duty there. But I'll miss the players. We've always had very characterful brass and woodwind players in the orchestra – Derek James [Principal Trombone 1981-9?], for one. He played basically everything on one instrument and one mouthpiece, and just adapted his playing to the repertoire. He could just do it, and if you happened to turn on the radio you immediately knew if it was the RPO because of his sound. The fact that he was Welsh as well obviously helped! On the other side of the band John Bimson and Jeff Bryant led a horn section that was full of guts and passion. These kind of characters gave the RPO its unique sound, and all the way through my period in the orchestra, when people have come and gone, we’ve had those personalities and characters. Now it’s a real privilege to see the next generation, led by young James Fountain on trumpet and Matt Gee on trombone, come along and play with the same character and passion.” 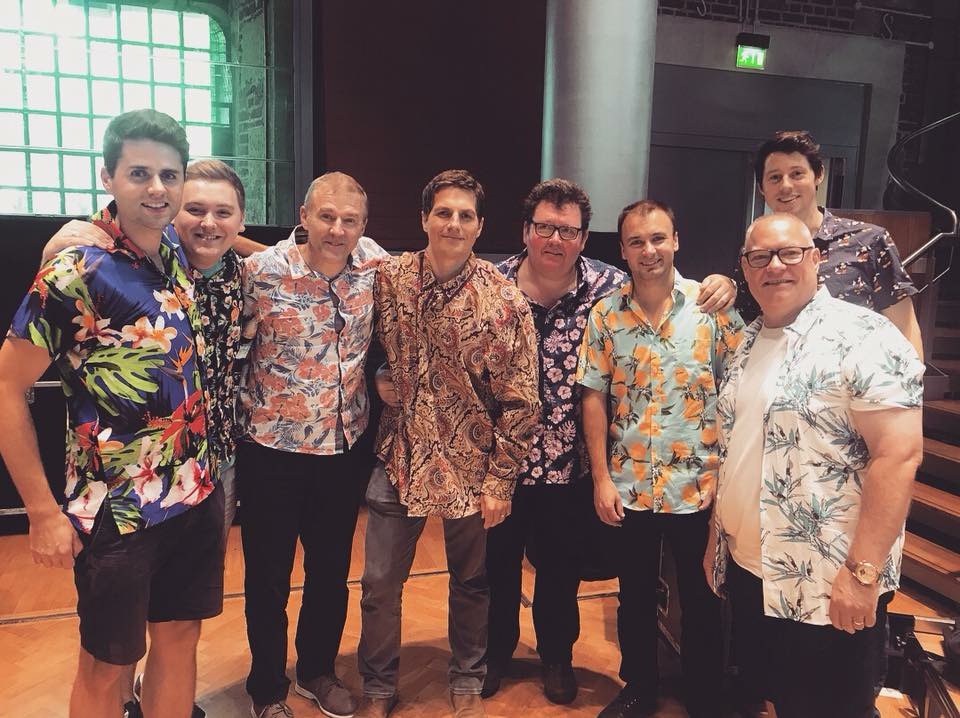 Asked to name the most memorable concert of his tenure, Roger protests that there are too many highlights. A few concerts do spring to mind though. “I remember doing Mahler 5 all around the States, and we had a particular tough travel day to Austin, Texas, and Gatti insisted on a full rehearsal, which is a bit unusual at that late stage of a tour. People were a bit upset – everyone was exhausted after days on end schlepping around in cattle-class, but this orchestra actually tends to thrive on that kind of adversity, and the concert at the end of it was just exhilarating.” And there have been highlights at the lighter end of the spectrum too. “The RPO was one of the first UK orchestras to perform music live to a film, and at the beginning of that we did a week at the O2 of Star Wars, and that was really exciting to do”.

Any favourite pieces to play? “We did a long Far East tour where we played Miraculous Mandarin a lot, and Dutoit didn’t seem to think that mezzo-forte was what I thought mezzo-forte was – he wanted it quite considerably louder than that. The bass trombone starts that suite almost as one of the soloists in the musical texture, and if you start that and crank it right up to massive, the whole orchestra just follows you. The speeds were really edge-of-the-seat too, and so it was incredibly exciting – that was one of my favourite pieces.” There was also a more sombre highlight. “We did a fantastic Verdi Requiem at the Proms the year of 9/11, where we played two days later, on the penultimate night of the Proms. That was quite special in the circumstances, performing such a great choral piece in a pretty unique atmosphere.”

So there have been plenty of highlights, but what about the very worst day of Roger’s RPO tenure? “Without a doubt, that was the trek from Shanghai to Nanjing on the first day of Golden Week, a Chinese national holiday. The tour promoters seemed to think that it would be good for us to go on the coach rather than the bullet train – about a 200 mile journey, scheduled to take about 3 hours. It ended up taking over 12 – the last 6 down the hard shoulder under police escort, with other drivers constantly trying to join in the convoy. There were tears, especially because the service stations were just unbelievable. But, we also had a lot of laughs and games, and we did an amazing show at the end of it, which was fantastic, and there was rather a good reception at the end of that, I think.” This wasn’t the only touring travel disaster. “Turkey has always been a great place to tour to, and we played in Ephesus a few times. On one trip there we were driving up the motorway, and unfortunately our bus driver hit a car in the middle lane. He stopped the bus, got out, and ran off down the hard shoulder, leaving the orchestra stranded, right there in the middle of the road!”

Alongside his work in the RPO, Roger is a busy player on the London session scene, and a highly respected teacher – he was Head of Brass at Trinity Laban for 17 years. I asked what he thought his musical legacy was. “We all have to be able to change style, and I think for my instrument in particular that’s changed a lot. The kind of repertoire we’re playing has changed an awful lot, and you have to adapt your style for that. As well as all the varied music in the orchestra, outside of the orchestra I’m very fortunate to do some really good sessions from time to time, which is a privilege, working with some fantastic players. These days it’s not unusual to turn up on a project where there are four or six bass trombones, and contrabass trombones, and composers often seem to want that brutal, slightly percussive way of playing, where you’re making big hits in extremes of the register. And all these different styles, you’ve just got to be able to do it.”

Roger was also one of the earliest members of what is now RPO Resound – the orchestra’s groundbreaking education and outreach department – and being part of developing that is a proud achievement. “I was very fortunate in that I came from a local school, Dwr-y-felin Comprehensive in Neath, which just had a really good music department. The school orchestra, before I got in it, had actually gone to the Musikverein and played, and there were regular summer trips to perform in Fairfield Halls in Croydon. We played pieces like Schubert 9, Brahms 1, and even Bartok Concerto for Orchestra! The county level orchestras were also really good, and at the national level there was the National Youth Orchestra of Wales. So I came through this system and went to music college, and very naively though that that was the norm everywhere – that everyone had had these opportunities, which of course they hadn’t. So it’s always been a thing of mine to get involved in education. In my first job in the Bournemouth Symphony Orchestra, they had just started doing outreach work – it was all brand new, orchestras didn’t do this kind of thing. So we were sent out into the local community to do things, and it was trial and error. When I came to the RPO, which was 7 years later, they had just started the education department which was then called ‘Sharp Edge’. The orchestra got us some training – we went back to school at the Guildhall, and studied alongside some of the people, like Tim Steiner and Paul Griffiths, who are now at the forefront of that work. What followed was very, very rewarding and it actually has shaped a lot of what I listen to when I’m in the orchestra. A lot of my musical antennae and radar – how you really put things together – was actually developed during those workshops and training days. So it’s actually a very natural progression to go back to Cardiff, just a few miles from where I grew up, and help as much as possible with music education down there.”

As we ease into Milan station, I have one final question. Tomorrow we will begin the long drawn-out process of trying to find a worthy successor to Roger. What advice would he give to the next Principal Bass Trombone of the RPO, to help them survive and thrive in this unique orchestra? “Come to work with a smile on your face no matter how hard you’ve been working, or what you’ve been doing the night before. You’ve got to listen very carefully to what is going on – playing with the basses, the bassoons, the cellos, and one of the best timpani players in the business. Don’t be timid, don’t hold back: you make the trombone section and the trumpet section sound good if you fill it. The bass trombone can be quite a deadly weapon – it can wipe out the whole band (and I’ve probably done that from time to time), so you need to know when to do that. The RPO has a reputation for being a big, strong orchestra, but you need to be able to deal with the extremes, including the extreme quiet dynamics. These are exciting times for the orchestra, especially with the fantastic new Music Director Vasily Petrenko on the way, so most of all, enjoy it!”