The RPO recently presented the Pinchas Zukerman Summer Music Festival at Cadogan Hall. It brought back a lot of happy memories from January's US tour, which began with ten days of touring the east coast with Pinchas (with me as a Guest Principal), and led to me being offered the Principal appointment by the end of the second part of the tour in San Francisco.

Mozart and Mendelssohn featured in the first two of three evening concerts the orchestra presented. Haydn joined Mendelssohn in the third. One of the many things I love about the RPO is its commitment to playing the widest range of repertoire, one day a large scale symphonic programme, the next day a movie score, a non-classical extravaganza at the Royal Albert Hall or, as was the case during this particular week, to reduce in scale slightly and enjoy performing some of the most satisfying chamber orchestra repertoire.

The first concert was a real highlight of my short time playing in the RPO. Starting with Mendelssohn's String Symphony No.10, surely one of the best openers for any chamber orchestra concert, Mozart's Sinfonia Concertante followed with Pinchas playing viola alongside the violinist Viviane Hagner. The concert concluded with Mendelssohn's 'Reformation' Symphony which, in honour of the 300th anniversary of the Presentation of the Augsburg Confession, was in every way a wonderful revelation to me.

The second concert featured the violinist Fumiaki Miura who is making a series of impressive debuts this season. This was his first appearance with the RPO and he performed Mendelssohn's Violin Concerto. Violin concerti seem to have been a popular part of the RPO diet since I joined as we have performed Mozart A major, Beethoven, Bruch, Tchaikovsky, Mendelssohn, Haydn C major, Glazunov and Sibelius in just a handful of months. 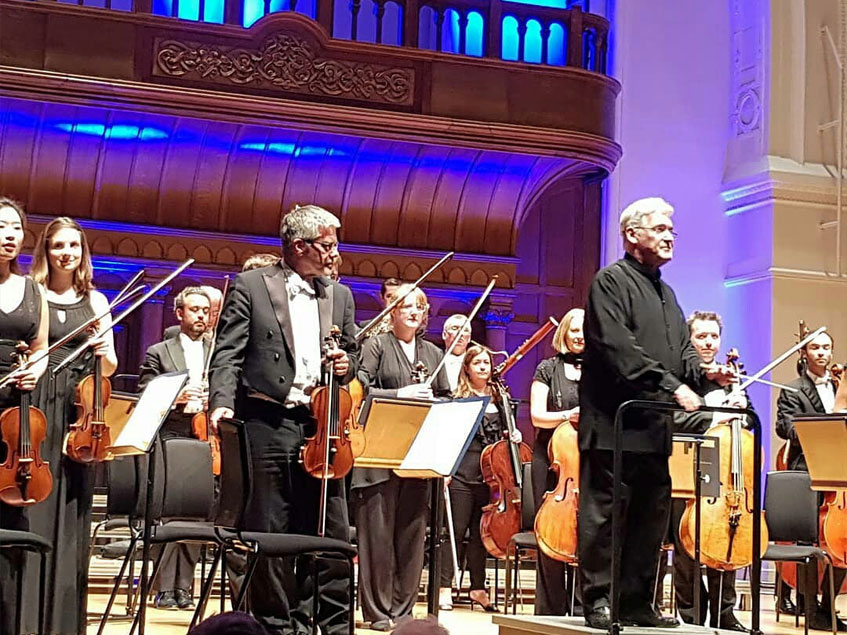 This second concert also featured our Principal Viola Abi Fenna and David Gordon from our bass section, joining forces with Pinchas and Fumi in Mozart's 'Serenata Notturna' for two small "orchestras" or, as in this performance, quartet and chamber orchestra. Mozart's 'Haffner' and 'Linz' symphonies bookended the concert.

Lunchtime trio and chamber recitals were presented throughout the week but the third and final concert featuring the RPO turned away from Mozart towards Haydn. Haydn's 'Bear' Symphony opened, followed by Pinchas performing his C major violin concerto where I was particularly satisfied to discover a few bars in the orchestration matching identically that of the C major cello concerto that I know so well.

I think, particularly for any string player in the RPO, being so close to such a violinistic legend, being so close to his sound and its immense projection, and being able to make music collectively is something really special. Mendelssohn's effervescent 'Italian' symphony concluded a most enjoyable and satisfying week of music making.