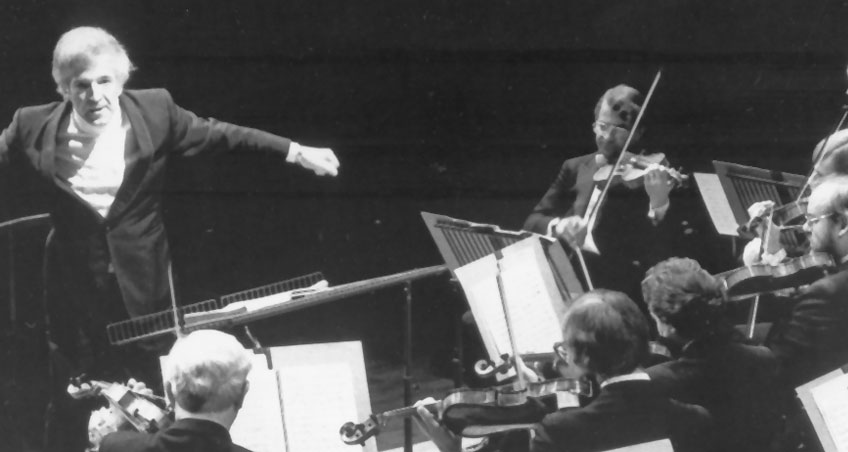 The Royal Philharmonic Orchestra was extremely saddened to learn of the recent passing of its former Leader, Barry Griffiths. Barry held the position with the Orchestra from 1976 to 1989, beginning under the baton of Antal Doráti and continuing with a glorious career, guiding the Orchestra through a more than a decade of distinguished performances, tours and recordings with a host of legendary conductors and soloists, including André Previn, Vladimir Ashkenazy, Yehudi Menuhin, Nigel Kennedy, Yuri Temirkanov, Luciano Pavarotti and many more.

The RPO family will fondly remember Barry and we extend our thoughts and condolences to his family and friends at this difficult time.

‘Barry made an enormous musical impact as leader of the RPO. He never failed to make the most beautiful and distinctive sound when playing the violin, whether playing solos in Brahms or Rachmaninov symphonies or just standing up in front of his section to demonstrate a phrase or bowing. He always insisted that the string section used the appropriate amount of vibrato, especially my viola colleagues and I, who always seemed to be sitting in his direct line of sight. Barry’s constant example and musical influence led to the RPO being renowned for the quality of sound of its string section, which led the Orchestra to be in great demand in the recording studio as well as on concert platforms across the world.

‘Another aspect of Barry’s personality was that whilst his authority on stage was highly respected, once we had finished performing and were socialising after concerts, he never failed to join in the post-concert celebrations with his friends. Also, not only was Barry a wonderful violinist, he also played the piano. I remember many occasions at parties, receptions or hotel lobbies when there was a piano to be seen, Barry would sit down and play what seemed to be an endless stream of popular tunes and show numbers, and the whole orchestra would sing along.

‘When I think of Barry, I remember a highly professional, always cheerful friend who represented all that was good about delivering world-class performances and fully enjoying the experience.’

‘Barry Griffiths was the consummate professional. During his long stay as leader of the RPO, Barry was virtually ever-present. I don't remember him taking a single day off, apart from occasional holidays, and he was the solid rock on which many RPO performances were based.

‘Barry was hugely popular with his colleagues in the RPO and it really was the end of an era when he decided to leave the RPO; he was a very hard act to follow.’