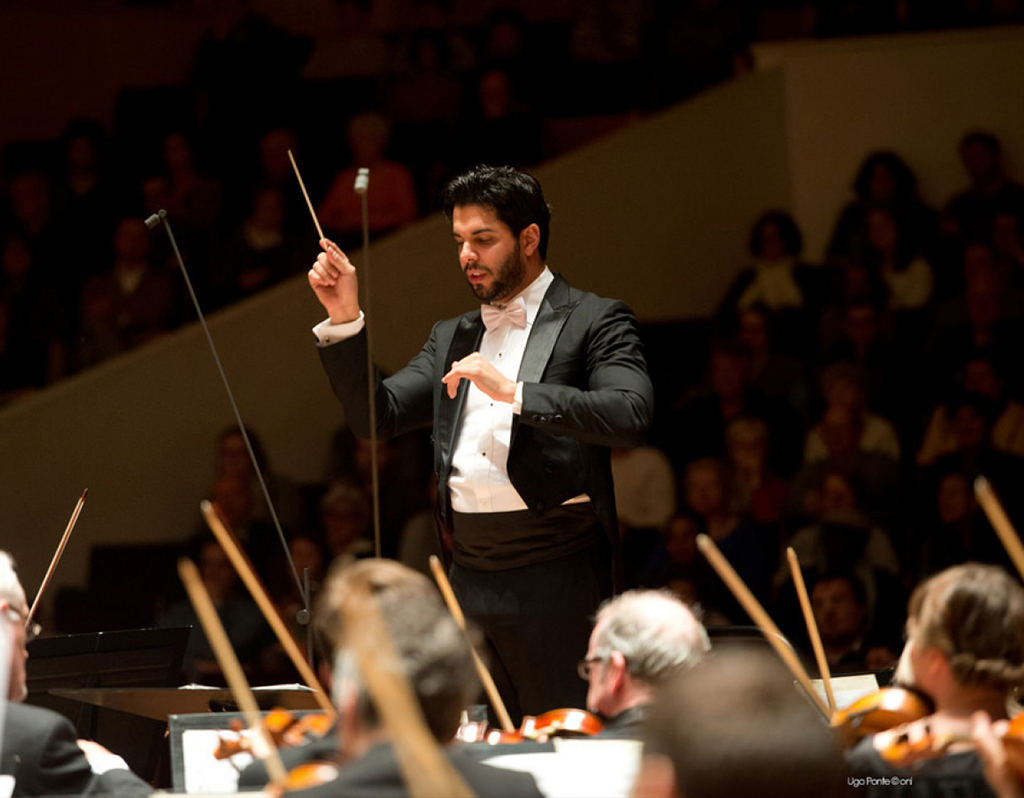 If music is a universal language, then what better musician to make it than one who is genuinely a citizen of the world? Domingo Hindoyan is such a person. The violinist and conductor was born in Venezuela to a Venezuelan father and Syrian mother. He trained in Europe and today lives in Switzerland with his Bulgarian wife, the opera singer Sonya Yoncheva.

“I am a musician of the world but it comes at a price – endless hours spent travelling!” he says.

This month, Domingo’s global odyssey brings him to the Royal Philharmonic Orchestra, with which he will conduct performances of Beethoven’s Piano Concerto No.1 with Leon McCawley, Brahms’ Double Concerto for Violin and Cello, Tchaikovsky’s Symphony No.5 and Glinka’s A Life for the Tsar: Overture. The series of concerts, beginning just days after the conductor’s 40th birthday, will take place from 19-23 February at the Cambridge Corn Exchange, London’s Cadogan Hall, Croydon’s Fairfield Halls and The Hexagon in Reading.

As someone who for seven years from 2006-13 played under the baton of Daniel Barenboim as a violinist in the conductor’s West-Eastern Divan Orchestra, followed by three years as his first assistant at the Staatsoper Berlin, Domingo guarantees to bring one very special quality to his concerts with the RPO.

“Daniel Barenboim was and remains a huge influence on me and my music but of all the wonderful things he taught me, the biggest is never to play or conduct a single note without there being a great deal of thought behind it. Why did the composer write this note? What is its contribution to the music?”

Domingo may credit Barenboim with his musical curiosity but admits, too, that curiosity is a Venezuelan trait.

“More than anything, we’re curious about our fellow Venezuelans and about the world,” he says. “Venezuelan children want to learn everything but especially music. I would say that as football is to Brazil, so music is to Venezuela.”

It’s a big claim, but Domingo has the evidence to back it up. For example, like many of his friends, as soon as he was old enough, he joined Venezuela’s famous El Sistema music education programme whose influence and presence today extends far beyond the country and where he played in orchestras. In the evenings he had lessons with his father, also a violinist who had studied at the Juilliard School in New York and a former president of the Orquesta Sinfónica de Venezuela.

“El Sistema was a fantastic experience, while my father was able to give me a different perspective on music,” says Domingo.

Aged just 19, the young Domingo took his first steps as a world musician when he left Venezuela for Europe where, he says, he experienced new repertoire that ‘refined’ his playing.

“At that time, there was very little opera, Baroque and early classical music being performed in Venezuela so hearing it in Europe made a huge impression on me.”

It was around this time that Domingo began to think seriously about one day becoming a conductor: “Slowly I began to move from playing the violin in orchestras to conducting,” he says. “My heart had always been in conducting. Ever since I was a young boy, sitting among the violins, I would be watching the conductor and thinking about what I would do if ever I got the chance to conduct. Now, today, having made the transition, I am pleased I bided my time and played all those years in the orchestra. It was valuable training.”

His concerts this month will be the first time Domingo has conducted the RPO. How does this musician of the world, endlessly travelling to new places, deal with new people and the challenges they can bring?

“Orchestral players have their expectations and I have mine but, in the end, meeting an orchestra for the first time is all about chemistry,” he says. “You have to establish a working relationship immediately. It’s all about respect and giving the musicians space for spontaneity but without altering your concept of the music.

“As a conductor you must have the music prepared in your mind. If you are clear in the way you communicate your ideas to the orchestra, the players will have confidence in you and respect you. If you aren’t, they won’t.”

Domingo is very much looking forward to conducting the RPO this month with programmes of renowned Romantic works. “I love Tchaikovsky’s Symphony No.5 and know it well. Glinka’s overture for A Life for the Tsar is rarely played but will sit alongside it very happily. No one can fail to love Beethoven’s Piano Concerto No.1 and of course, I know Brahms’ Double Concerto intimately, having played the violin part in concert myself.”

Away from the international stage Domingo, who has two children, spends time nurturing the branch of El Sistema that he founded in Geneva in 2011. Over 150 young people are enrolled in the programme, which also performs outreach work in the city’s juvenile detention centres.

“It’s valuable work,” says Domingo. “Of course, the young people in these centres are not held for long but while they are, we try to introduce them to music. I’m delighted to say that a few of them have decided to continue their association with the project beyond their detention.”

Domingo Hindoyan: a global ambassador for music in more ways than one.

Cambridge Corn Exchange 19 February Plus see the links below for his other upcoming concerts with the Orchestra.