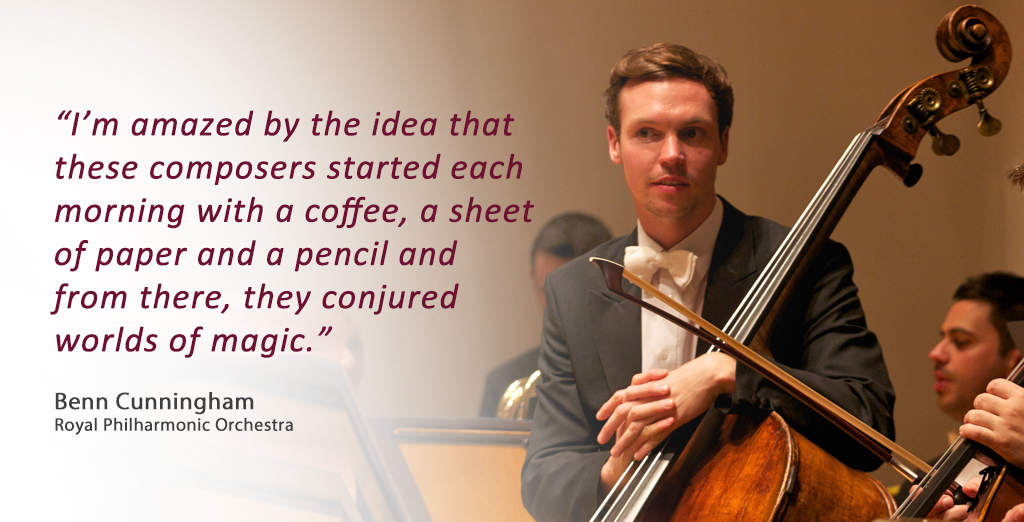 Hi Benn, thank you for sitting down with us to talk about life in the Royal Philharmonic Orchestra (RPO). The Orchestra is best known for its versatility, performing everything from heart-racing film scores like John Williams' Star Wars to the most transcendentally beautiful Romantic-era music of Tchaikovsky and Beethoven. With such an interesting, rich mix of repertoire, does that make the rehearsals challenging?
The rehearsal process is usually pretty smooth as the musicians in the RPO are a pretty easy-going, collaborative bunch. Tchaikovsky and Beethoven are all real power horses of the genre; all orchestral musicians grow up learning their music and it sits at the very centre of orchestral playing and technique. I think it really suits the RPO, the virtuosity and youthful energy really plays to the orchestra’s strengths.

Typically, how long does it take for everyone to prepare for a concert?
Most of these pieces we play are what we call core repertoire so the musicians playing them will have spent their lives learning and performing them. We will all have learned the tricky passages and have our plans of attack worked out so when we come to perform them again, it’s a matter of revision and dusting off a few fingering patterns. We will often only come together for a three-hour rehearsal before we play pieces we know so well which means you have to come ready to play (ie personally prepared) and ready to listen to your colleagues and the way in which they play. You can rehearse for days but it’s useless if you don’t have your musical antennae out and your ears open!

Have there been any funny moments during rehearsals?
Afraid not.

For those who have not attended an orchestral concert before, what would you like them to know?
I always try to remind people who are fresh to classical music just how much there is out there to discover and that they will find something which makes the hairs stand up on their neck. I sometimes compare it to people going to the cinema. There will be some films you like, some you don’t, some which start slow and get better halfway through and some that keep you gripped all the way till the end. It’s okay to have these kinds of reactions to classical music and to find out what it is that excites you. I’m always astounded myself by the power of this large group of musicians on stage, moving and breathing together and the epic sounds they create. I’m also always amazed by the idea that these composers started each morning with a cup of coffee, a sheet of blank paper and a pencil. From there, they conjured worlds of magic. I think that’s pretty special.

Do you have any final words of wisdom?
Practise your scales. I mean it...