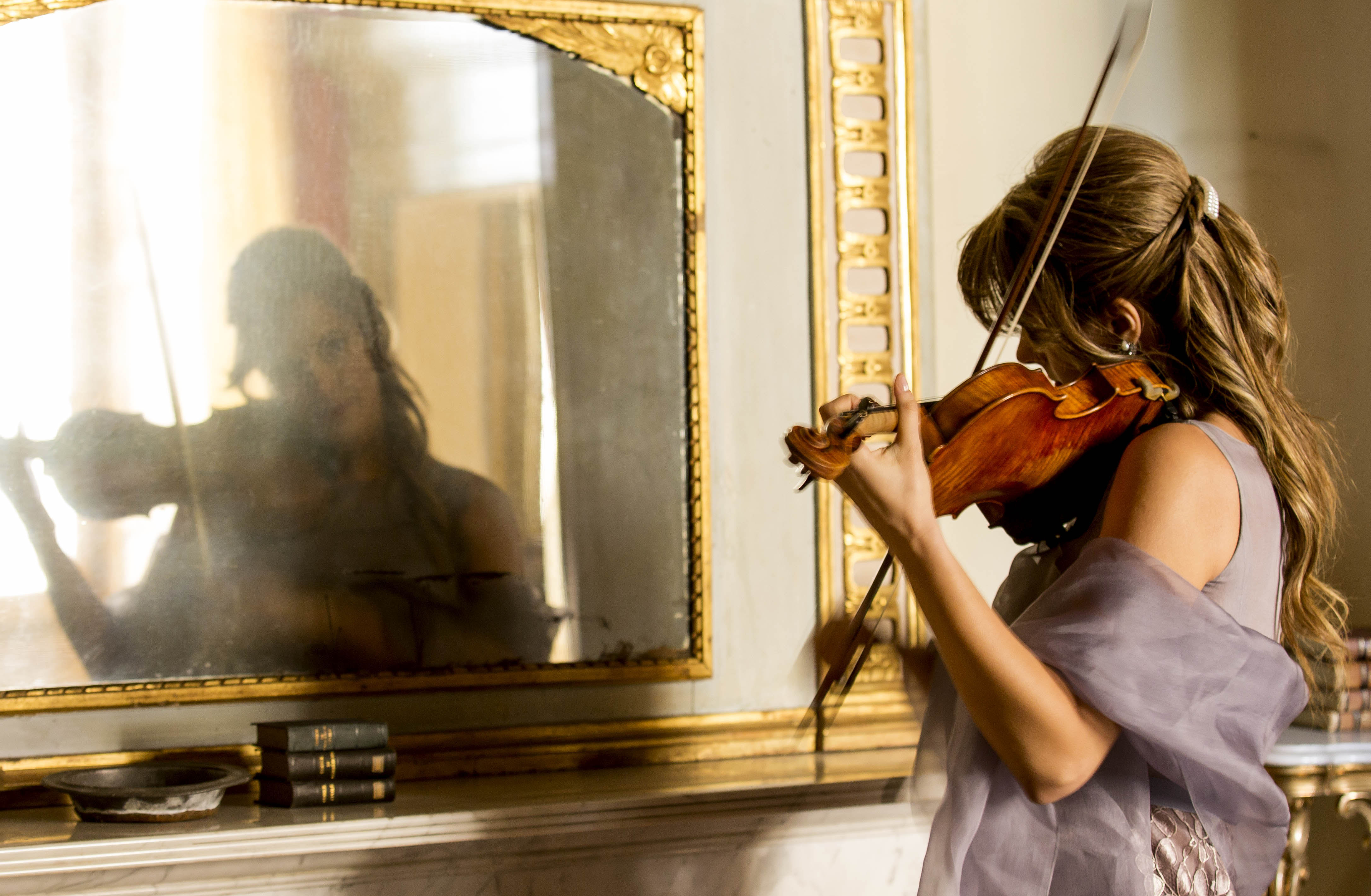 Hi Francesca, thank you for taking time out to talk to us. We're calling you in Milan right now – I thought that London was your base?
It is – but I’m in the process of refurbishing my flat there in time for it to be finished in May – in the meantime I’m staying in Milan. I’ll be back in London properly as soon as I can!

Can you tell us a little bit about your background?
My parents are both music lovers – my dad used to play the violin as an amateur and my mum studied a bit of singing at the RCM in London but she always suffered with nerves so she stopped. The passion for music remained in both my parents though so I’ve always been supported by them. It was my dad who first handed me a one eighth sized instrument when I was four, so that’s how I started. I ended up performing in a concert at the same age in my kindergarten and then I did a recital at five and as a soloist at seven.

Do you get nervous before a performance?
I do get nervous sometimes but I think that can help in giving that extra bit in concert. I think it’s not about feeling nervous – it’s about knowing how to react to all the little symptoms you start feeling. For me it starts with breathing, with feeling grounded – like I have roots in the stage. Everybody else seems to lift up from there and hold their breath. I think instead that you should really feel like you’re settling into the stage. I think you should get used to nerves and embrace them to help you deliver an exciting performance.

You concentrate on two violins don’t you? How far is your chosen instrument an extension of you?
Yes I use two antique Italian instruments. One is an ex-Ricci Guarneri del Gesù from 1734 and the other – which is mine – is a Francesco Ruggeri from 1697 – the golden Cremona period. It feels like working with two astounding colleagues in a way because they bring something to the performance if you listen and absorb the sound. You have to know the violins because being old they can also be pretty cranky – they react to different humidity and weather. It’s different everywhere I go – and really interesting because I have to be aware of what the violins tell me and how they’re responding in the moment.
For me its amazing to be part of the history of these instruments and not the other way round. They’ve been played at a very high level of performance for hundreds of years and hopefully will continue to be after me – I’m just one of a string of violinists in the history of these instruments which is incredible to think about. I think you leave a little of your soul in them like players before me have – the history of the instrument absorbs something of the people who play them having vibrated in their hands for so many years.

So the instruments own you rather than the other way round?
I think so yes – and lots of my colleagues feel the same way. You know that you’re not the central piece of the instruments and their history – you’re just one of the players who has the joy of working on that particular instrument during that part of its life.

Ahead of your forthcoming performance with the RPO, what are your feelings for Mozart’s 3rd Violin Concerto...
I have an interesting relationship with the piece because I first learned it when I was seven. It was one of the first that I learned. Then, I had no understanding of it, but it’s one of those pieces that is often played in exams by students. With me though I didn’t play it with an orchestra for many years – I finally did so a couple of years ago. It was really interesting because it was this piece that was somehow in my head – I knew it by heart from my childhood. But I had to completely relearn it – to rethink it as an adult. I really enjoyed doing that because I’ve been working a lot on changing my view on classical concerti recently while working with Sir Roger Norrington – I’m going to be recording ALL the Mozart concerti with him shortly. It’s been very different to my school upbringing – I’ve been questioning all my previous views on the piece and have been avoiding anything too romanticised. I’ve cut down on vibrato and have been thinking about shape and phrasing, especially where there’s the second movement which is just heavenly and is so easily distorted by “encrusted” tradition. I’ve been trying to disencrust it!

So are you going to take on the purists then? Do you have a blank sheet approach to the piece?
Well yes – my approach is all about the phrasing and what the style WOULD have been. I’ve been reading about historic interpretation but I play with a modern setup – I have a modern bow and I don’t play on gut strings – so I’m a little “in between”. Where interpretation is concerned – even with addition of little variations in the Rondo – I’ve taken advice from people like Sir Roger and it’s been fascinating to see how different the piece is compared to what I grew up with.

How does that apply to the RPO? What is your relationship with it?
Well to begin with it’s like having a perfect instrument. I’m an Italian and it’s like driving a Ferrari – the orchestra gives me an opportunity to do what I want because I know I’ll have the support of a group of musicians who listen and who have incredible experience – it can be a bit scary because you’re working with people who constantly work with top players at the top of their careers. They understand, they support, and they build an interpretation with you – you get their input and together you can change little things depending on what you hear coming back from them. It’s always been a real joy to work with the RPO – I’ve played Mendelssohn and Bruch with it. It was one of the orchestras that I would go and listen to when I was studying in London, so I got to hear them play all kinds of repertoire and I feel very close to their ideas and interpretation and the conductors that they’ve worked with. It’s really exciting for me!

To find out more about Francesca Dego, visit www.francescadego.com.

See Francesca Dego perform with the RPO this upcoming season: