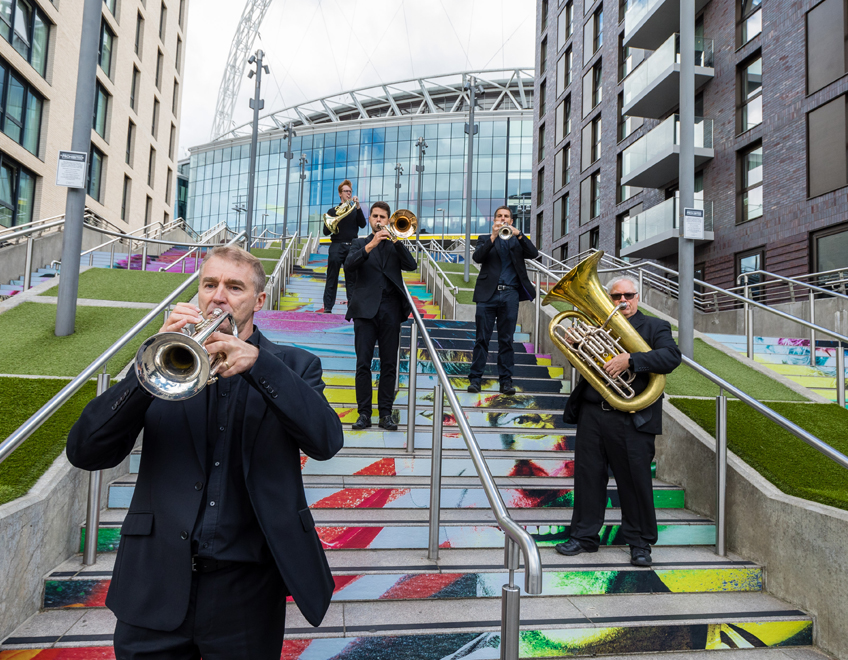 Leading musicians from the RPO surprised Wembley Park’s community and its visitors with their first live appearance together since lockdown and the first collaboration since it was announced in 2019 that the Orchestra will be moving its headquarters to the area.

To enable social distancing, small ensembles of string, brass, wind and percussion players appeared in the open air from the Beton Building’s balcony, on the Spanish Steps, and in London Designer Outlet’s Retail Square. They played a mixture of classical favourites and pop classics associated with Wembley Park’s iconic venues. Appearances took place on Saturday 5 and Sunday 6 September and by the end of the weekend, 38 musicians from the RPO had played at Wembley Park.

The programme was conceived by Wembley Park Cultural Director, Josh McNorton, and Deputy Managing Director of the RPO, Huw Davies, in response to the ongoing closure of live music venues, and the negative impact this has had on both audiences and artists.

Since the onset of Covid-19, Wembley Park has reimagined its extensive cultural programme, presenting a range of new musical and artistic diversions that make the most of its open spaces, support artists in this difficult time and demonstrate how beneficial cultural programming is to public wellbeing.

The initiative is part of the RPO’s long-term plan to imbed itself within and engage with the local community by providing free and accessible quality musical experiences that are in line with Wembley Park’s cultural strategy and the RPO’s mission to be a truly inclusive and contemporary international Orchestra for the modern age. Wembley Park and the RPO have a shared vision to establish a creative hub bringing together education, community outreach, performance, digital projects and administration in a single location.

The RPO is already well-known and loved in the London Borough of Brent, and over the last 15 years has worked with more than 9,000 young people in the Borough through projects such as The World Orchestra Project (2012) (supported by the Mayor’s Music Education Fund), Trans-cultural ConneXXions and the three-year ‘7-Up’ schools’ project.

“We’re thrilled that the Royal Philharmonic Orchestra chose Wembley Park as the location to make its first public appearance since lockdown. The collaboration has enabled us to treat our community and visitors to beautiful and much-missed live orchestral music, as well as support this country’s leading musicians after a long period during which they have been unable to perform to the public. We look forward to creating more exciting initiatives in the future as the RPO moves its headquarters here.”

“This is an exciting day for the Royal Philharmonic Orchestra; not only are members of the Orchestra making their first public appearance since March, but today marks the start of the Royal Philharmonic Orchestra’s move to Wembley Park and the realisation of a long-held ambition to imbed the Orchestra in a diverse community through a combination of performance, community engagement and education activity. Working with Wembley Park, the RPO is looking forward to creating a new cultural neighbourhood for North West London, with music at its heart.”

The Orchestra was thrilled to have been welcomed to our new future home at Wembley Park.

Thanks to all who were involved in this weekend of surprise pop up appearances.

Thanks to Wembley Park for supporting our musicians at this time with this opportunity to perform together for the first time since lockdown and for making us feel so welcome.