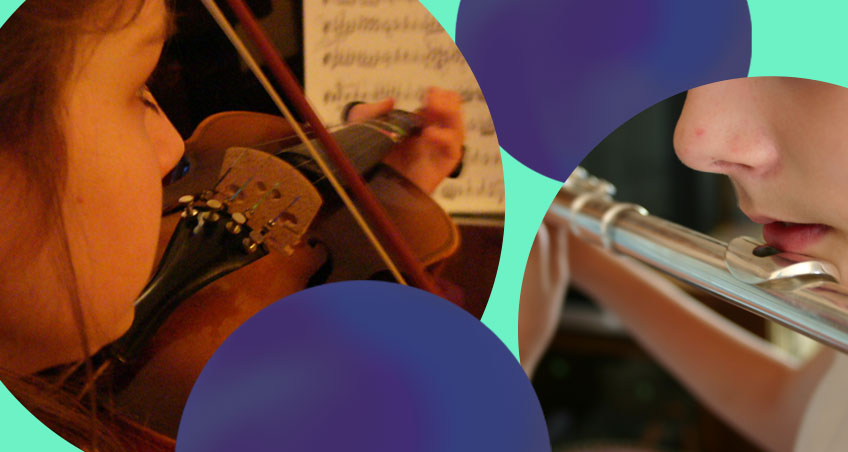 Music has been a lifeline for millions of people during isolation. Whilst the popularity of online concerts and streaming sites has been well documented, for the country’s children, the isolation era has also been a time to learn and develop skills in playing musical instruments.

Whilst 15% of children have done, on average, an extra half an hour of music practice a day, 51% have done more than an hour a week – with 3% doing an hour or more extra every day of the week.

Geographically, there was a notable regional variance between the regions where children were more likely to play a musical instrument. Although, across the board, for those that were learning an instrument, children had spent more time doing extra practice during the long weeks of home isolation.

The RPO research also suggests that many children have engaged more broadly in creative and artistic activities during weeks stuck at home. Beyond those children that played a musical instrument, 10% of parents said their children had explored new genres of music to broaden their horizons. Other popular creative past-times during isolation included; reading books (32%), painting (22%) and even directing plays at home (6%). Wholesome artistic pursuits compared favourably to the proportion of children that reportedly spent their free time on social media via their phones (30%).

James Williams, Managing Director of the Royal Philharmonic Orchestra commented: “Following a period when there has been great concern over music’s place on the national curriculum, it is enormously heartening to discover that so many children are taking an interest in music at home. This research sits firmly with the RPO aims to place orchestral music at the heart of contemporary society, collaborating with creative partners to foster a deeper engagement with communities to ensure that orchestral music is accessible to as inclusive and diverse an audience as possible. Our enhanced focus on digital media in recent months has also helped our commitment to community outreach and enriching lives.”

“It is also important to note that during the darkest hours of the coronavirus pandemic, people turned to music to help them get through the day, to engage in positive activities in the home and to support their mental health and wellbeing. Our latest survey on children’s engagement with music shows that music has helped people of all ages during the prolonged period of isolation. As attention turns to rebuilding the country, music will continue to have a vital role to play to help people re-engage with society, friends and the work routine – whether this be listening to recorded music, attending a concert or, indeed, the joy of mastering a musical instrument.”

Vasily Petrenko, Music Director Designate at the Royal Philharmonic Orchestra added: “Culture and the Arts bring meaning to our lives. Culture and the Arts make us the human beings we are and gives structure and sense to the society we create; they provide us with real values and fulfil our mental and emotional existence. The choices of our children to play music at a time of national crisis is significant in so many ways. It underlines the universal reach of music, it demonstrates the power of creativity to counterbalance fear and disruption at a time of crisis and it allows us to express feelings and emotions we cannot articulate with words. The things we have turned to during the crisis will be the very things that will also help us to rebuilt society in the months ahead.”

For more information on the Royal Philharmonic Orchestra contact:

The research was conducted by Maru/Blue in April for the RPO among a nat. rep. sample of 2,110 adults. The survey asked parents about their children’s musical habits during the period of home isolation.

About the Royal Philharmonic Orchestra

As the Royal Philharmonic Orchestra (RPO) approaches its seventy-fifth anniversary in 2021, its mission to enrich lives through orchestral experiences that are uncompromising in their excellence and inclusive in their appeal, places the RPO at the forefront of music-making in the UK. Performing approximately 200 concerts each season and with a worldwide audience of more than half-a-million people, the Orchestra embraces a broad repertoire that enables it to reach the most diverse audience of any British symphony orchestra.

Cadogan Hall in London has been the Royal Philharmonic Orchestra’s home since 2004. Here it performs an annual season of concerts, many of which are subsequently toured to its seven principal residency venues. In addition, the Orchestra promotes more than forty-five concerts each season at partnership venues across the country. In London, the Orchestra also promotes a season of symphonic concerts at the Southbank Centre’s Royal Festival Hall and a popular series at the iconic Royal Albert Hall, as the Hall’s Associate Orchestra. As a respected cultural ambassador, the RPO enjoys a busy schedule of international touring, performing in the world’s great concerts halls and at prestigious international festivals.

The RPO aims to place orchestral music at the heart of contemporary society. To achieve this, in 1993 the Orchestra launched RPO Resound, which has grown to become the most innovative and respected orchestral community and education programme in the UK and internationally.